Hey everyone! Clara's back! Time really flies, as it's actually already been a year since we last worked together. Returning now for her third session, beautiful as ever (and well summer tanned), Clara endures another round of strict bondage. This time she managed to pull off a new predicament style position, while looking drop dead gorgeous at the same time. Amazing stuff!

The first scene features a simple hogtie on the floor. Clara has her elbows tied together, with rope looped around her shoulders for added security. Her wrists are secured to her ancles, and another rope keeps her knees locked together. Throw a crotch rope into the mix, and of course a 2" ball gag, and you have the makings of a classic hogtie.

The next scene feautures a very cool strappado position. Gagged with a 2" ball gag, Clara has her elbows and wrists tied again, as are her ancles and knees. She's hoisted up by her wrists pulling her arms up behind her. A rope around her neck is then secured to her knees, forcing her to bend over. Clara's made to stand like this, balancing on her stiletto heels, which was quite a challenge for her. After a few minutes she started trembling, dealing with the strain of her leg muscles starting to lock up. In an alternating fashion, she was trying to put all her weight on one leg in an attempt to relax the other - difficult when balancing in 5" heels. It was truly an awesome sight, and I really like the angles from behind showing Clara's lovely legs in their full glory. We certainly have to do this position again, and next time, I think I'll throw in a crotchrope which can be tied off at the ceiling.

You'll notice that in this position a new kind of rope was used. I've long been wanting to shoot a couple of scenes using cotton rope. It has a specific look which lends itself to various bondage styles in different ways. It has a soft feel, yet it's very tight fitting as it's a bit more flexible than nylon fibres. Let me know what you think.

In the third and final scene, Clara gets to relax a bit for a position using zipties. Only her wrists and ancles are zipped together so she can move around a bit. This time around I decided it was time for Clara to be med-wrap gagged. Her mouth is stuffed with a huge wad of cloth, and a few strips of duct tape are put over her mouth, sealing the cloth in, before doing the wrap-around. For Clara, this actually turned out to be a suprisingly effective gag, which was quite interesting.

Clara is dressed in white lingerie throughout this session. An elegant bra and g-string set with matching suspenders, complementeded with very fine tanned 7 denier stockings, and topped off with a pair of black velvet 5" stiletto heels. The heels have a D'Orsay inspired cut which provides a nice peek at Clara's soles.

Fetish pictures were also shot during this session. You can check these out by visiting the fetish section of the site: FF17. 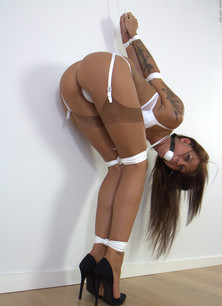 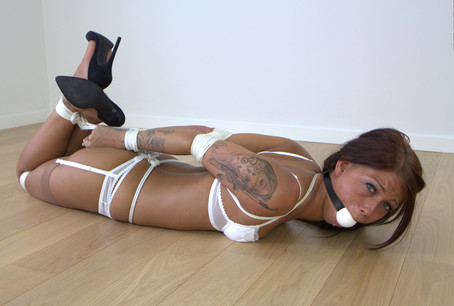 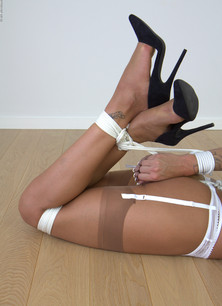 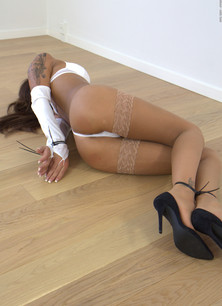 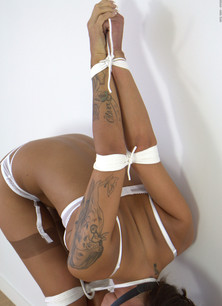 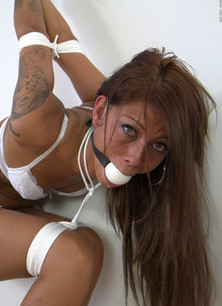 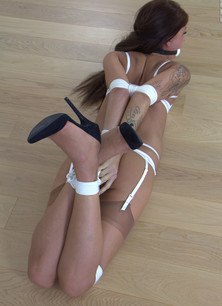 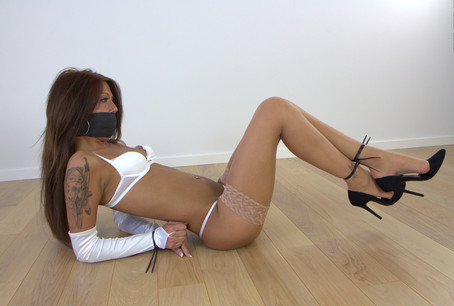 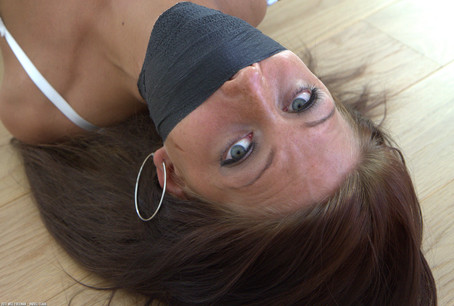