Greetings! I'm quite excited to report that Maria has returned for another round of strict bondage at the hands of your truly!

I must say, it certainly is a real pleasure to be able to continue Maria's bondage training, and tie her up for some great bondage pictures. Once again, she shows a keen interest in how the bondage is executed, paying special attention to the look and feel, the knots, etc., which is really quite wonderful for a rigger like me!

To start out, Maria is tied sitting on the chair, her arms secured in a box tie, torso ropes framing her bust nicely. Her ancles and knees are also tied, and she's crotchroped. While it's a pretty basic tie, it accentuates Maria's body quite graciously.

Next up, Maria is in for a ride as she endures a very strict hogtie on the hard wooden floor. Once again, her elbows are crushed together for that unique and overwhelming look, that every bondage fan loves. The actual hogtie rope itself is first secured around her torso, before being run through her elbow ropes and down to her ancles. It may no be that apparent, but, for Maria's slender body, lying on her rather large bust - as it's pushed forward from having her elbows pinned behind her - puts a fair amount of pressure on her chest, which restricts breathing. Adding a torso rope like this only adds to that pressure, of course, as the rope is pulled towards her ancles as she struggles. Not an easy position, and while Maria was panting a bit, she was determined to pull through allowing for some great shots.

In the last scene, we have a revisit of the zip tie theme, which is becoming customary. I used white zip ties this time to contrast the black lingerie. Pictures will be available for the next update.

Once again, Maria is gagged and blindfolded throughout the session. Even though the 2" ball gag is quite a challenge for her, I made sure to use it during most of the scenes, to make her used to the feeling. Only during the last scene, is she gagged with the smaller 1.75" ball gag.

Fetish pictures were also shot during this session. You can check these out by visiting the fetish section of the site: FF09. 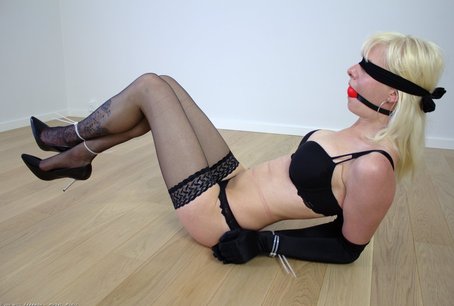 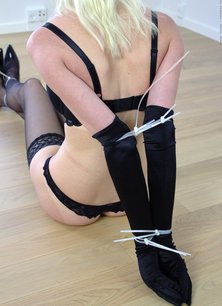 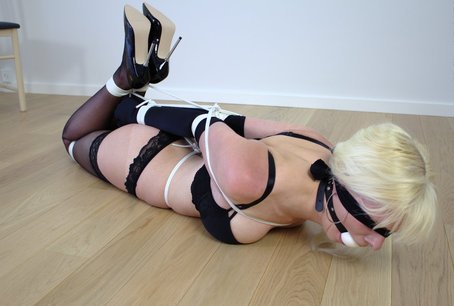 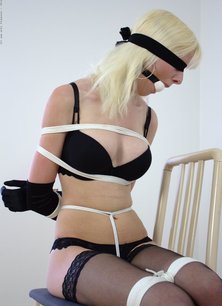 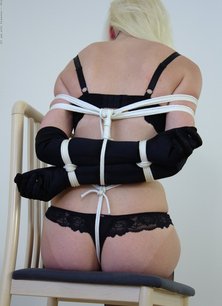 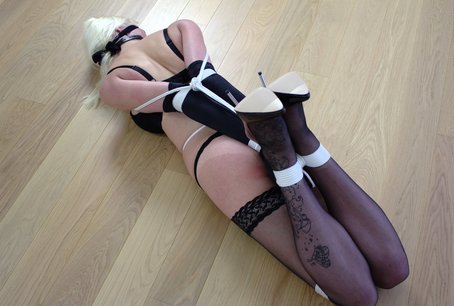